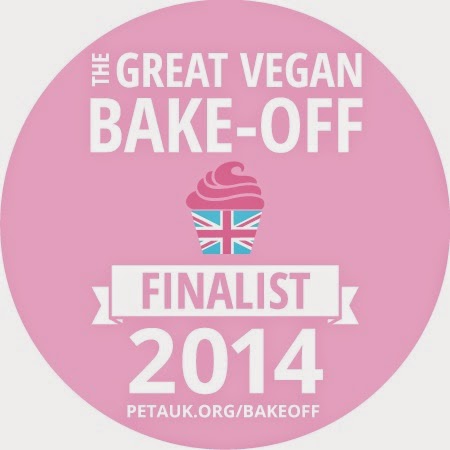 *I was thrilled to be a finalist in Peta UK's Great Vegan Bake Off competition, with this recipe, and finished in third place! http://blog.peta.org.uk/2014/09/the-great-vegan-bake-off-2014-the-winner/ * 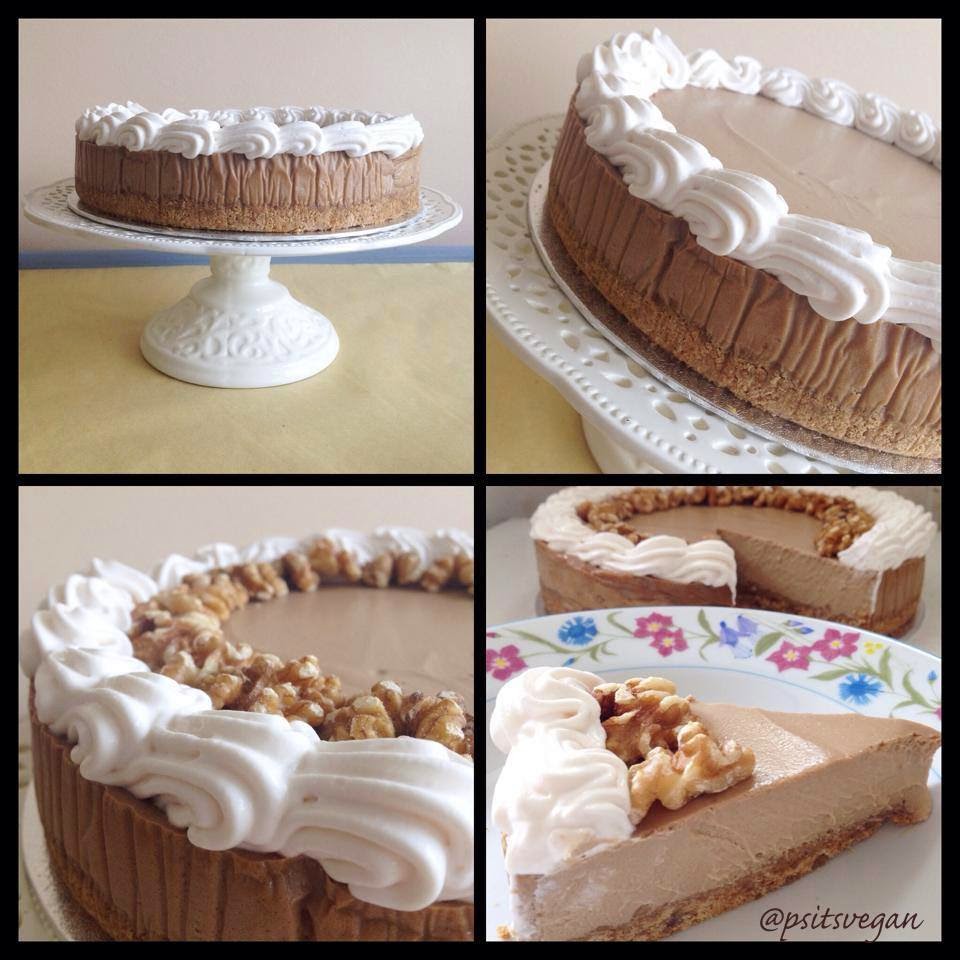 It's always been my favourite dessert, ever since my non-vegan days, scoffing half a Sara Lee!

When I became vegan, cheesecake was one of the first recipes I sought out. The first recipe I followed was from "The Cake Scoffer", and used tofu and a whole tub of ice cream!

These days I like to flick between raw "cheesecakes" made with whole foods such as cashew nuts and  coconut oil, and naughtier cheesecakes made with Tofutti cream cheese.
The recipe I'm sharing falls into the latter category.

This is my entry into Peta's "Great Vegan Bake-off" competition.

A "buttery" biscuit base, topped with a sophisticated creamy cappuccino cream cheese topping (which is lightened up slightly by subbing some cream cheese for silken tofu).

I have to stop for a moment to credit my dad for the flavour combination of this cheesecake, as it was his request!

-The "cream cheese" I use is Tofutti Creamy Smooth, which can be bought from most health food shops, or online from Goodness Direct.
-The egg replacer powder I use is Ener-g; others may work, as may cornflour (cornstarch), but I haven't tried!
-For this recipe you need vacuum packed silken tofu (it’s sold near the canned beans in most supermarkets, and is made by a company called “mori-nu”).
-The walnuts are optional, as is the whipped cream (but I think it makes it extra special!)
-I used a carton of Soyatoo whipping cream, (available here) but you could also make your own whipped coconut cream (instructions follow).

You will need:
Ingredients:

For the base
For the cream cheese topping
Optional extras:
Method:

1. Preheat oven to 175 C. Place a dish of boiling water on the bottom of the oven (the extra humidity helps stop cracks forming on the cheesecake.)

2. Line a 9" spring firm pan with baking paper (and ideally wrap the tin in brown paper, too).

3. To make the base... smash the digestive biscuits into crumbs with a rolling pin (or use a food processor).
Melt margarine in a saucepan or in a bowl in the microwave. Add biscuit crumbs and stir well.
Tip the mixture into the base of the cake pan, and press in using either the bottom of a glass or the end of a rolling pin. Refrigerate until needed.

4. To make the topping.
In a small bowl whisk the first batch of egg replacer powder with 6 tablespoons of water. (Preferably using a handheld electric mixer).  Add 3-4 tablespoons espresso powder, (depending on how strong you'd like the coffee flavour). Beat until the mixture is frothy.

3. Drain the tofu and add to a food processor along with the cream cheese, sugar and egg replacer mixture.
Blend until the mixture is smooth, stopping the blender now and then to scrape down the sides with a spatula (to make sure all the cream cheese gets blended in).

4. Whisk second lot of egg replacer with water as before and add to food processor along with the vanilla extract. Blend again until smooth and creamy.

5. Pour mixture over the biscuit base, and smooth it out with a spatula.  Bake for 40-45 minutes, until the cheesecake looks “almost set”, but the middle is still a little wobbly!
Turn the oven off, and leave the cake in the oven for an extra 10 minutes.

6. Remove tin from oven, and place on a cooling rack.  Once the tin is cool (may take an hour or so!) place in refrigerator for at least 4 hours, or preferably overnight.

For the creamy soyatoo topping:

-Whip the Soyatoo cream at full speed for 2 mins, then refrigerate for at least an hour before piping onto your cake.

For coconut whipped cream:
Remove can of coconut milk from the refrigerator. The creamy part of the milk will have separated and turned solid in the can. Carefully scoop this out of the can and into a bowl. (or use entire contents of a carton of coconut cream).
Add icing sugar and beat with a hand blender for 2 or 3 minutes until thick and creamy.
Refrigerate for at least an hour, before piping onto your cake.

7.  Once cheesecake has been refrigerated for at least 4 hours, remove from tin, and pipe on the whipped cream (if using).  Add optional walnut halves.

8. Take lots of photos of your masterpiece!
(if you're a fellow Instagrammer, tag me @psitsvegan!)